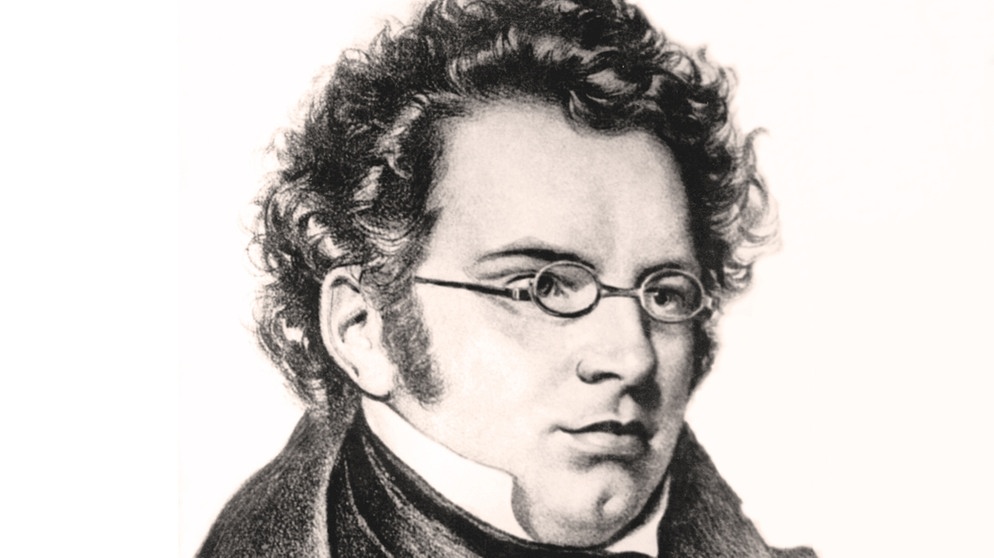 “Do you think I’m good enough for Schubert? I have my doubts.”

Karajan to Walter Legge in 1948

Franz Schubert’s symphonic oeuvre has often been neglected in comparison with his chamber and piano works and – of course – his six hundred Lieder. Today, his symphonies are generally held to be an important link between Beethoven (his elder contemporary) and Bruckner, an ardent admirer. 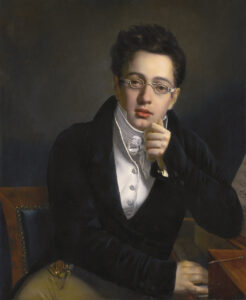 Almost incredibly, the 1st symphony D 82 is the work of a 16 year-old boy. Schubert had just finished his choir scholarship at the “Stadtkonvikt” (Imperial Seminary) in 1813. There he got to know the orchestral works of Haydn and Mozart, which had an evident influence on this 1st symphony. Its first performance was in the same year, presumably by “Otto Hatwigs Orchester-Verein”, an amateur orchestra. The next came as late as 1881 (53 years after Schubert’s death) in London. The first publication was three years later. Brahms edited the work, although he thought little of Schubert’s early symphonies and suggested to “archiving them reverently but not publishing them”.

One of the few admirers at the time was Dvořák, who wrote a long essay about Schubert in 1894: “I have just observed that mastery of form came to Schubert spontaneously. This is illustrated by his early symphonies, five of which he wrote before he was twenty, at which, the more I study them, the more I marvel. Although the influence of Haydn and Mozart is apparent in them, Schubert’s musical individuality is unmistakable in the character of the melody, in the harmonic progressions, and in many exquisite bits of orchestration.”

Like many conductors who started their career in the first half of the 20th century, Karajan initially only performed the famous last two Schubert symphonies, the “Unfinished” and the “Great” C major. The recording of the 5th with the Berlin Philharmonic in 1958 was an exception. But in 1978, at the age of 70, he started out on a recording of all the symphonies with the Berlin Philharmonic and completed it in the same year. Gramophone wrote “A sense of discovery runs through each work… Musically, Karajan is matchless.” 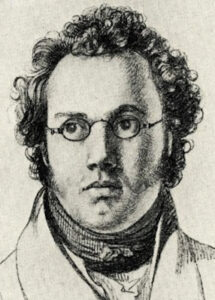 Schubert’s 2nd symphony was written a year after his 1st, between December 1814 and March 1815 around his eighteenth birthday. After having left the “Stadtkonvikt”, Schubert lived with his father, taught at his school and took private lessons in composition from Salieri. Even by Schubert’s standards of productivity, 1815 was a really prolific year. He composed over 20,000 bars of music – masses, operas, piano music and about 140 Lieder. The 2nd symphony was dedicated to Innocenz Lang, the headmaster of his former school and it is possible, but not certain, that it was performed there. The first professional performance was in London in 1877, 49 years after Schubert’s death. 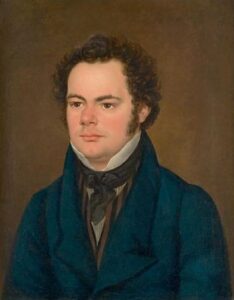 “There is in creative minds an impulse to write, which it is difficult to curb, and this was especially the case with Schubert, whose genius was like a spring which nothing but exhaustion could stop from flowing… Although he sometimes wrote carelessly, and often diffusely, he is never at fault in his means of expression, while mastery of form came to him spontaneously. In originality of harmony and modulation, and in his gift of orchestral colouring, Schubert has had no superior.”

The 3rd is the shortest of Schubert’s completed symphonies. The 18-year-old started to write it only two months after his second in late May 1815 and finished it six weeks later. But the actual composing process obviously took about nine days! It is a youthful work in the best sense, a vivid mixture of Weber (1st movement), Beethoven (2nd movement), Haydn (3rd movement) and Rossini (4th movement) – but nevertheless distinctively Schubert. The symphony was written for the amateur orchestra of Josef Prohaska but its first complete and professional performance was – like the first two symphonies – in London many years after Schubert’s death. 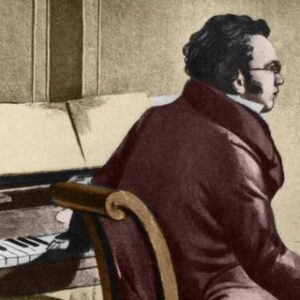 “Schubert’s fourth, too, is an admirable composition. It bears the title of “Tragic Symphony”, and was written at the age of nineteen, about a year after the “Erl King”. It makes one marvel that one so young should have had the power to give utterance to such deep pathos. In the adagio there are chords that strikingly suggest the anguish of Tristan’s utterances.”

“Tragic” is the title Schubert himself gave to his fourth symphony, it is his first symphony written in a minor key, C minor, the Beethoven key par excellence. Like any other composer of his time (and for decades to follow), Schubert was influenced by Beethoven, so this wasn’t accidental. Maybe the heroic gesture is not what we today associate with Schubert but this symphony is wonderful “Sturm und Drang” like one of Goethe’s early poems. Its first performance after Schubert’s death (maybe the first performance ever) was earlier than the symphonies No. 1 – 3 in 1849, at a time when thanks to the intercession of Schumann, Mendelssohn and Liszt, Schubert’s instrumental works began to receive ever greater acclaim.

Like all of Schubert’s early symphonies (except the Fifth), Karajan only conducted the Fourth for his complete recording in 1978 commemorating the 150th anniversary of Schubert’s death. 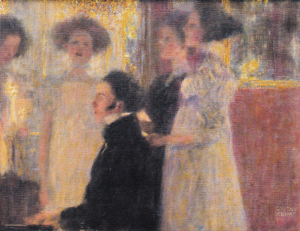 “It was with great pleasure and feelings of gratitude that I read not long ago of the performance in Berlin of the B flat major Symphony by Herr Weingartner, one of the few conductors who have had the courage to put this youthful work on their programmes.”

Schubert’s symphony in B flat D 485 was his fifth and – like numbers 1 to 4  – the work of a composer less than twenty years old. Schubert wrote it in autumn 1816 for the “Hatwig’sches Orchester”, an amateur orchestra that gave the young Schubert the opportunity to test and improve his orchestration. The fundamental character of the symphony is light and friendly, maybe influenced by Mozart, whose orchestration of the first version of his 40th symphony Schubert copied – a small orchestra without clarinets, trumpets and timpani. “O Mozart! Immortal Mozart! What countless impressions of a brighter, better life hast thou stamped upon our souls!” Schubert wrote in his diary in the same year and the beginning of second movement is very similar to the menuetto of Mozart’s violin sonata K 377.

The Fifth is the only one of Schubert’s early symphonies that Karajan conducted before his complete recording in 1978. This 1958 studio recording was with the Berlin Philharmonic Orchestra. 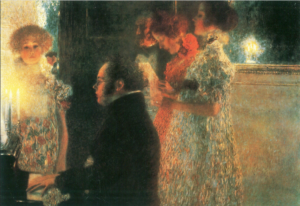 “Although the two [last] symphonies are by far the best of Schubert’s, it is a pity that they alone should be deemed worthy of a place in our concert programmes. I played the sixth in C major and No. 5 in B flat major a dozen times with my orchestral pupils at the National Conservatory last winter; they shared my pleasure in them, and recognized at once their great beauty.”

Schubert’s 6th symphony D 589 was written between October 1817 and February 1818, when the composer was about 21 years old. Schubert himself named the symphony “Great” because of its orchestration with clarinets, trumpets and timpani. Today it is called the “Little C Major” to distinguish it from the later symphony in C Major D 944, now known as “the Great”, which is much longer. For the first time in Schubert’s symphonic oeuvre, the third movement is not a “Menuetto” as in numbers 1 – 5 but a “Scherzo”, inspired by Beethoven’s 2nd symphony. The last movement is written in the “Italian style” à la Rossini, whom Schubert regarded as an “extraordinary genius”, it sometimes even sounds like Verdi. The Sixth’s first public performance was on 14th December 1828, soon after Schubert’s death a few weeks before. The “Allgemeine musikalische Zeitung” wrote: “A beautiful, carefully crafted work, whose most appealing movements are the third and the fourth.”

Like numbers 1 – 4, Karajan conducted the Sixth only once, for the complete recording with the Berlin Philharmonic in 1978. 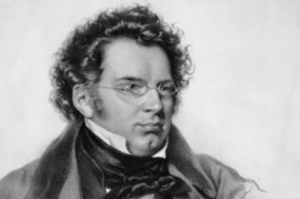 This is one of the most popular but also most mysterious symphonies of the repertoire – Schubert’s “Unfinished” symphony in B minor, D 759. Is it the 7th or the 8th? There are sketches for a scherzo – Why does it only have two movements? Was it written in 1822 or in 1824? Why did Schubert use the highly unusual key of B minor? Regardless of all this, the two completed movements of the “Unfinished” are amongst the best he ever wrote and accordingly among the best anyone ever wrote. No one who has listened to the disconsolate beginning or to the incomparably tender Andante will ever forget the experience. The unpublished manuscript in the keeping of Schubert’s friend Anselm Hüttenbrenner, who was still alive in 1865 when the Schubert expert Johann von Herbeck visited him and found the score. The first performance in the same year caused a sensation. The critic Eduard Hanslick wrote: “The tonal beauty of the two movements is enchanting.” And Antonin Dvořák wrote in 1894: “His ‘Unfinished’ symphony and the great one in C are unique contributions to musical literature, absolutely new and original, Schubert in every bar. (…) Personally I prefer the ‘Unfinished’ symphony even to the one in C; apart from its intrinsic beauty, it avoids the fault of diffuseness.”

Unlike Schubert’s symphonies 1 – 6 the “Unfinished” was a centerpiece in Karajan’s repertoire. He conducted it in concert on 60 occasions, the first time in 1937. More than 50 years later, it was programmed for his final New York concerts with the Vienna Philharmonic in February 1989. Tim Page recalled: “The lower strings played with a smoothness and repose that was all but unearthly; the music seemed to emanate from the walls.” 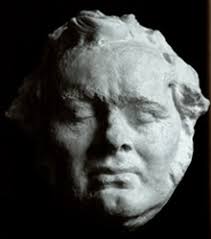 “The richness and variety of colouring in the great Symphony in C are astounding. It is a work which always fascinates, always remains new. It has the effect of gathering clouds, with constant glimpses of sunshine breaking through them.”

Schubert’s last symphony in C major D 944, the “Great”, almost holds as many mysteries as his “Unfinished”. The date on the autograph was interpreted as “March 1828”. But modern scientists who analysing the paper proved this wrong and suggested it had been composed in 1825. In spring 1824, Schubert wrote to Kuppelwieser that he was making “his way to the great symphony” even before the first performance of Beethoven’s Ninth! He was obviously trying to compete with Beethoven. Indeed, at over 50 minutes, the “Great” is by far Schubert’s longest symphony and in the early 19th century (together with Berlioz’ “Symphonie fantastique”) was only topped by Beethoven’s Ninth. Ten years after Schubert’s death, Robert Schumann – who was shown the manuscript by Schubert’s brother Ferdinand – arranged a first performance as good as was possible at the time with the Leipzig Gewandhaus Orchestra conducted by Felix Mendelssohn-Bartholdy. Schumann famously praised the symphony for its “heavenly length” and continues “at first, we may feel a little uneasy … but in the end a delightful impression remains. We feel that the composer is the master of his tale, and that, in time, its connections will become clear.”

Karajan conducted Schubert’s “Great” 10 times in concert between 1937 and 1969 and three times in the studio. He chose it for his first-ever recording session with the Vienna Philharmonic in the Musikverein in September 1946.