César Franck was a Belgian composer and organist, born in 1822. He worked most of his life in Paris.

Franck’s life was the rare case of a modest artist who composed all his best-known pieces after his 50th birthday. These works (a handful of orchestral and chamber music pieces) gained popularity only after his death, but since then they have been a fixture in the concert halls. In 1889, Franck was run over by a horse-drawn carriage and never recovered. He died on 8 November 1890 in Paris.

Franck’s violin sonata was one of the first pieces Karajan performed in public. He played the piano part in a concert at the Mozarteum in 1925. Franck’s mixture of lyricism and passion, skilfully proportioned and orchestrated, was very much to Karajan’s taste from the beginning of his career up to his mature recordings of the symphony and the symphonic variations (a work for piano and orchestra with a duration of approximately 15 minutes. Karajan made two recordings of them, one with Walter Gieseking and one with Alexis Weissenberg). 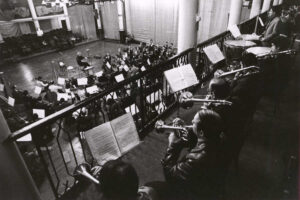 These photos were made during Karajan’s studio recording of Franck’s symphony with the Orchestre de Paris in 1969, an orchestra that had been founded only two years before. In those days the members of the staff were obviously allowed to smoke in the studio and in Karajan’s presence! 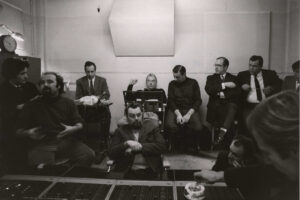 We’ve prepared playlists for you with Karajan conducting Franck (spotify only contains the first recording of the symphonic variations). Listen to them here.