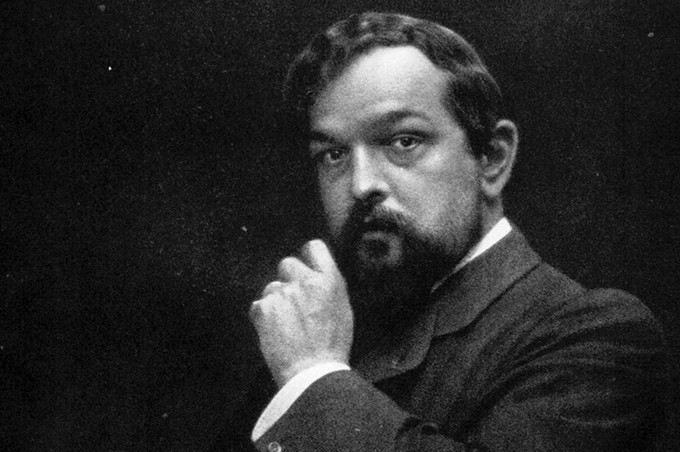 Although Karajan conducted “Nocturnes” and “Trois chansons de Charles d’ Orléans” in a few concerts in 1953, his commitment to the oeuvre of Claude Debussy focused on three works: “Prélude à l’après-midi d’un faune”, “La mer” and “Pelléas et Mélisande”. He performed the two orchestral works throughout his career (about 50 times each), the opera – the only one Debussy completed – in three productions for stage and for record in 1954, 1962 and 1978.

“Prélude à l’après-midi d’un faune”, first performed in 1894, was the breakthrough for Debussy and a milestone in the history of modern music. The 10-minute piece is inspired by the lazy atmosphere of a sunny afternoon but is also a musical painting of the “fin de siècle” between lethargy and endangerment. Pierre Boulez said: “One could say that the modern music begins with ‘L’après-midi d’un faune’.” The “Herbert von Karajan Memorial Concert” with the Vienna Philharmonic under the baton of Valery Gergiev in December 1999 had this piece by Debussy on the programme, together with his “La mer”. The “Trois esquisses symphoniques pour orchestre” (“Three symphonic sketches for orchestra”) were written 1903 – 1905 and they evoke all the glitter and danger of the sparkling sea. Debussy’s major work for orchestra with its colourful orchestration and its triumphant conclusion had a prominent place in Karajan’s French repertoire. The movements are “De l’aube à midi sur la mer” (“From dawn to noon on the sea”), “Jeux de vagues” (“Play of the waves”) and “Dialogue du vent et de la mer” (“Dialogue of the wind and the sea”).

“Pelléas et Mélisande” was an opera Karajan didn’t conduct very often (9 times in the theatre) but with extraordinary success. After a single performance at the Scala in 1954 (with Elisabeth Schwarzkopf as Mélisande!) Karajan and his stage designer Günter Schneider-Siemssen started their long and fruitful collaboration with “Pelléas et Mélisande” at the Vienna State Opera in 1962 (the 100th anniversary of Debussy’s birth).

Neville Cardus wrote for the Manchester Guardian about the production: “I can make no better compliment to Karajan, the Vienna State Opera Orchestra, and the singers than to say that all these intrinsic qualities of the work, not generally understood, were brought home. I confess that more than once I came near to tears, eyes as misted as the beautiful stage settings of Günter Schneider-Siemssen.” And Joseph Wechsberg wrote for Opera: “This is a lyrical and a dramatic interpretation and, when the inexorable climax comes towards the end, one sits spellbound. At the same time Karajan opens the delicate texture of the score, lovingly displaying its beauty, making everything clear and transparent.”

“Everyone loved working with him. The atmosphere was conducive to camaraderie. He was lord and master of the orchestra, of course. If there was any rustle of noise he would lower his head till there was complete silence. Then he would go. I’ll never forget that. He was something else. Pretty amazing.”

In 1978, Karajan recorded “Pelléas et Mélisande” in the studio. Richard Stilwell as Pelléas worked with Karajan only once for this essential recording, appearing with Frederica von Stade as Mélisande. He and von Stade – not only in this recording – were a sort of dream team among American opera singers. In an interview for “LA Opus” in 2020, Stilwell recalled the audition with Karajan:

Gramophone wrote about this recording: “Von Stade is a quite lovely, pure-voiced Melisande, childishly innocent in her actions but with a touchingly vulnerable and emotional core […] Stilwell, sounding young, eager and ardent, is a very likeable Pelleas; and van Dam, a consummate artist in everything he undertakes, admirably portrays the bluff, bewildered Golaud who cannot comprehend the delicate creature on whom he had stumbled.”

And Richard Osborne: “There are those who think of ‘Pelléas et Mélisande’ as a remote and unworldly opera, lacking dramatic thrust. But Karajan always paced it superbly, the text paced out on rhythms that neither hurried nor flagged; the climaxes, which in this opera arrive at every dynamic level from ff to pp, timed and driven home with the instincts of a true man of the theatre.”