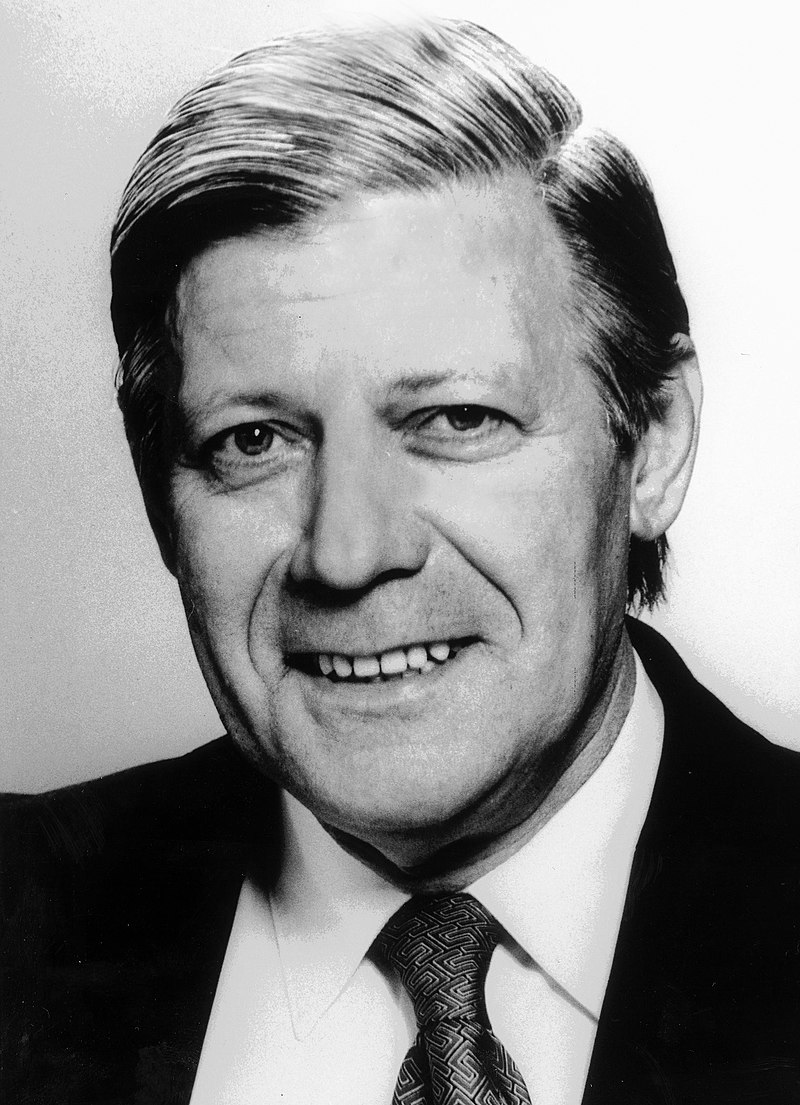 “I admired and loved him.”

Helmut Schmidt, the West German chancellor (1974 – 1982), and his wife Hannelore “Loki” Schmidt, were great fans of Karajan’s. On the occasion of a concert at the Salzburg Easter Festival in 1982, they even visited Karajan and his wife in Anif and stayed overnight. The schedule of the German government notated: “BK (Bundeskanzler) and wife to Salzburg. Among other things Mozart Requiem and Verdi ‘Te Deum’. Overnight stay at Karajan’s.” (The schedule was wrong. It was Mozart’s C minor mass and Bruckner’s “Te Deum”.) Helmut Schmidt also went to St. Tropez to take a trip on Karajan’s yacht “Helisara VI” and he got a present from Karajan which was typical for the musician and the modern technology expert – a Walkman.

One could say that cultural projects had higher priority in Karajan’s days! In May 1981, Helmut Schmidt himself did his best to engineer a Berlin Philharmonic tour of America the following year. But even the chancellor couldn’t acquire the governmental support for the orchestra’s 100th anniversary. In a two-page letter Schmidt apologizes for the fact and also mentions the “Turandot” film project and the problems with the Chinese government.

He ends: “A further intervention wouldn’t be successful at the moment. I’m very sorry that I don’t have better news for you because I’d love to make a contribution to both projects. If I can help in any other way, please let me know. Best greetings – always yours, Helmut Schmidt.” 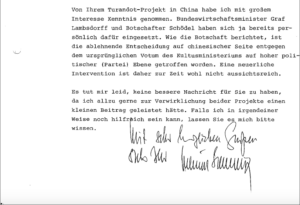 In a letter from 1983 – Schmidt was no longer chancellor – he assured Karajan of his moral support concerning the rumpus between the Berlin Philharmonic and Karajan about the engagement of the young clarinettist Sabine Meyer. 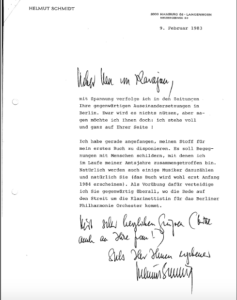 The reports in the newspapers about your current conflicts in Berlin have caused me considerable tension. It won’t help you, of course, but I’d still like to say, that I’m completely on your side!

I’ve just started planning the topics for my first book. I shall be describing several encounters that happened when I was in office. Naturally there will be some musicians be amongst them, including yourself, of course (the book will not be published before early 1984). I’ve been practising for the book by taking your part whenever I hear people talking about the tussle over the clarinettist for the Berlin Philharmonic.

Best greetings (also to your wife!)